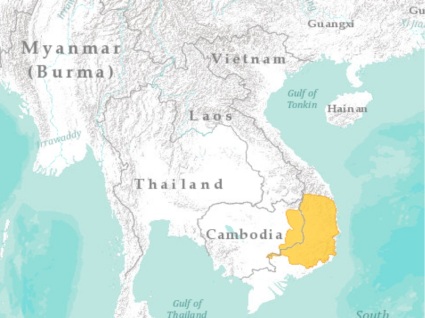 Black-shanked Douc (Pygathrix nigripes) is one of the Old World monkeys of the family Cercopithecidae. It is found in north-eastern Cambodia (east of the Mekong River) and southern Vietnam. The largest population of this species is in Seima Biodiversity Conservation Area, Cambodia, where the population estimate of approximately 42.000 individuals. The largest population in Vietnam is in Nui Chua National Park, which is estimated at 500-700 individuals. In southern Vietnam, it survives in a small isolated forest fragments. Black-shanked Douc hybridizes with Red-shanked Douc (Pygathrix nemaeus) where their distributions meet in northern Vietnam. 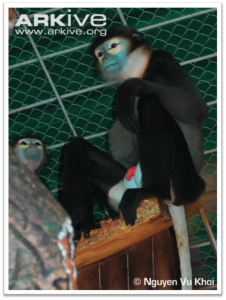 There is not sexual dimorphism in this species. The head-body length is 55-63 cm in males and 54-60cm in females, and the tail is 69-84 cm in males and 65-80 in females. Males are bigger than females (8-11 kg and 6-8,2 kg, respectively). Its face is blue-grey which is unique to the species, with large yellow-orange eye rings. The throat is surrounded by a white collar ending in an orange line. Black area on forehead continues between ear and cheek, behind ears and onto shoulders. Upper and lower legs, feet and hands are entirely black. Chest and belly are very light grey. Penis is red. Scrotum and inside of thighs are blue. White patch surrounds tail, that is white and end in a thin tassel.

Black-shanked Douc is diurnal and predominantly arboreal. They are found in evergreen, semi-evergreen and semi-evergreen-mixed deciduous forest, as well as in coastal dry forest, up to 800m from sea level. It seems that species of this genus can adapt to relatively heavily disturbed forest. The daily activity budget include resting (61%), feeding (27%), travelling (7%), engaging in social behaviour (3%) and engaging in other activities (2%). The diet of this primate is variable by site. 82% of intake are leaves and petioles (at least 75% are young leaves), 14% are fruits and seeds and 4% are flowers.

Groups are typically unimale-multifemale with a sex ratio of 2.5 females to each male. They come together in a fission-fusion behaviour and their size depends on the habitat, being from 3 to 50 individuals. Both male and female dispersal occurs. Females probably leave as a result of female- female aggression. Juvenile males disperse and join all-male or non-reproductive groups. 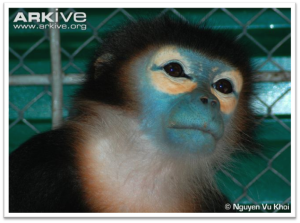 Regarding the reproduction, both solicit copulation before and after ovulation. Female solicits copulation by moving her head from side to side. She presents her ano-genital region and crouches down in front of him. Male responds with a vocal grunt. Then, he looks to a copulation site, the female moves to the site indicated followed by the male and copulation occurs. Female menstrual cycle is 28-30 days. Gestation of 200-205 days. During pregnancy females become very calm and quiet. They don’t participate in social activities and they sit close to a protective female. Twins are rare. Birth Interval is 11-38 months. They reach puberty at 4-6 years in female, 4-9 years in male. At 8-18 months they become independent from his mother. Longevity of P. nigripes is 25-30 years.

Black-shanked Douc is classified as endangered on The IUCN Red List from 1988, and the trend is to decrease. It is believed that this species has suffered a decline of over 50% in the last three generations due to forest loss and hunting. Much of the habitat of the centre and south of Vietnam suffered war damage. The extensive forest exploitation for coffee plantations, rubber and cashew have fragmented their natural habitat too. Last but not least, their behaviour makes it an easy species to hunt. The people of northern Vietnam hunt them as tradition, the southern do it for the pet trade. This species is listed under CITES Appendix I, as well as under Appendix 1B of Decree 32 (2006) in Vietnam and is protected under The Law on Forestry NS/RKM/0802/016, article 49, in Cambodia.
There are several protected areas in Cambodia (Mondulkiri Protection Forest, Seima Biodiversity Conservation Area, Snuol Wildlife Sanctuary, Phnom Prich Wildlife Sanctuary) and in Vietnam (Bu Gia Map National Park, Cat Tien National Park, Kon Kai Kinh National Park, Kong Cha Rang Nature Reserve, Mom Ray Nature Reserve, Nui Chua National Park).