First of all, we would like to know how you have decided to become a primatologist.

It was largely by chance. When I studied Natural science in Rome, I wanted to do field research with sea stars and other “simple” marine animals. But Universities in Italy are still closed, and it was impossible to get a PhD in any field without having connections. So I decide to leave my country, I made an Inter-rail, ended up in Holland, asked at the University in Utrecht whether I could help in data collection there to make some practice, and they proposed me to help with long-tailed macaques. Then I got to know Filippo Aureli at a conference, I asked him whether I could leave for his field site in Mexico, and he changed my life…

What was your motivation to study cognition? Would you like to do field studies?

I did start with field studies, when I left for Punta Laguna, in Mexico, where Filippo had hid field site. It was a wonderful experience. And I still think that field studies are the best approach to study cognition. It’s just simply hard to get enough funding to study cognition in the field, while implementing all the appropriate controls. Anyway, I started with cognition for two very different reasons. The first one was very practical: I had brought my dog on the field, and Filippo was against this, for several good reasons. Therefore, I had to think of a B plan. The second reason was that spider monkeys in Punta Laguna were doing great things. These monkeys are characterized by a complex social system, in which individuals frequently split and join again into subgroups of different size and composition – a system which might be really cognitively demanding. Therefore, I thought it could be worth to study whether cognitive skills in spider monkeys are really special, somehow.

What has been your work career before Max Planck Institute for Evolutionary Anthropology?

I started in Utrecht, moved to Mexico with Filippo Aureli, and then landed up at the MPI, where Josep Call was also interested in these inter-specific comparisons including spider monkeys. And working with him has given me the chance to learn a huge amount of things I had no clue about before!

You have worked with a lot of species: capuchin monkeys, spider monkeys, chimpanzees, bonobos, gorillas, orangutans… with which species do you prefer to work?

It depends, all of them have something “special”. I like gorillas a lot, because it takes a while to “gain their confidence”. But my heart is still in the jungle with spider monkeys…

Explain us how was your experience working with model researchers in primate cognition as Josep Call and Elisabetta Visalberghi.

Working with them gave me the chance to learn a lot of different skills that you would otherwise never learn. All of them have a different focus, and a different approach to the study of animal cognition. But all of them have always been extremely patient and tolerant to me. Still now, when I enter Josep’s room with some stupid question, he patiently explains me why I am so wrong, without ever sounding superb! And this is an even better lesson, than all the thousand ones more he taught me.

There is a lot of controversy about treatment to non-human primates in research centres. We would like to know your opinion about welfare of the animals you have worked with.

I am completely disgusted by invasive research, of any kind. I refuse to cite any work that has been done by causing sufferance to any form of animal. I am vegan since many years, my research shows me every day how complex animals are, and I don’t see any justification for certain forms of research, no matter how they should make our knowledge advance.

When I am giving classes, I always remind students that there are several ethical standards we might feel to have. Some people I know would never work with primates, not even with wild ones in a forest, because any interaction with animals would be a form of disturbance. Other people would feel fine by cutting a monkey open and implanting weird stuff in their brains, like they do at the MPI in Tubingen, just for example. To me, that should not even deserve the name of research.

However, I feel relatively comfortable testing captive animals at the zoo, when their living conditions are kind of decent and if they ended up in captivity for reasons other than research. I even tested pigs that were destined to become sausages, and it was really though for me, but I am sure that knowing more about the way animals feel, and think, might make humans more aware of their needs, and hopefully will one day improve the quality of their lives, in the wild and in captivity.

Do you think research justifies the captivity of these animals?

No, it surely does not. But I think that research can improve the quality of life of individuals who are already captive, and work as an essential form of enrichment for them.

I have no idea, really, but many of the things we believe now will surely be obsolete by then. There will likely be many species becoming extinct, not just primates, unfortunately. But hopefully, people will learn to protect animals, and respect their dignity, so that there will be no captive animals hold for entertainment, or just for research…

A part of primate cognition you worked with other species, such as wild boar and domestic pigs, which is the animal do you feel most curious about? What do you think about these species, who are really different when compared to us, have contributed in the world of cognition?

I am still fascinated by sea stars, I am absolutely interested in humans (and I am working on some projects on inter-cultural diversity), other mammals, and I have tens of spiders at home that I want to test, as soon as I get some free time… I don’t think there is a species which is not worth being observed: all of them are perfect adaptations to the environments they live in, and have therefore a lot to teach us. And after all, I am not sure we are so different, all in all…

What role does dietary breadth and brain volume play in self-control? And the role of group dynamics, such as fission-fusion? Which one, in your opinion, would have determined the evolution of cognition?

These issues are intensively debated, and I don’t think there is just a correct answer. I think that multiple social and ecological factors interact in shaping our cognitive skills, including self-control, but not only that. I tend to think that social factors might be more relevant for many species, but again, it depends a lot on the species, and it is hard to contrast evolutionary hypotheses without including many species and taxa, and using a really comparative approach. I think we are unfortunately yet very far from disentangling all the factors that might affect cognition, but extensive long-term collaborations among institutions might provide some help…

I am not sure, and it surely also depends on how we define these terms. In general, I think that altruism might exist, but I also think that the evidence we have far is not convincing, at least in primates. In terms of calculating reciprocity, I think that evidence is especially scant, and that if it operates, it is just in few individuals and species. Emotional book-keeping, in this respect, makes much more sense. However, in general, I think that most studies reporting altruistic behavior in primates were motivated by the genuine intention to “demonstrate” that some species have “human characteristics”, have thus skipped some essential control conditions, and ended up with a bunch of positive results, which are not so convincing… From a scientific point of view, this is a pity. And from a conservationist perspective, why should we ever need to demonstrate that other species are like us, to love them and protect them?

We have seen that you tried to measure the prosociality in different species using food tasks and that they did not show evidence in that context. Which other method could you measure prosociality with?

Testing prosociality with food surely provides an easier set-up to implement control conditions. However, prosociality can surely involve several currencies other than food, and different approaches might surely provide different results. For instance, primates might be prosocial by helping others or consoling them. I think evidence in this sense is more convincing, and it might simply be that food is too a valuable currency to be prosocially given away in most conditions. 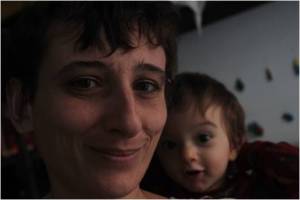 Federica Amici and her youngest son.

What have been the biggest difficulties you have found in being part of the world of primatology? What advice would you give to people, like us, who want to dedicate ourselves to primatology in the future?

The biggest challenge I have always had, and I will always have, is to balance family life and work. This is a problem for all women doing research, especially when field trips are required, and competition is high. I think society is still not ready to provide women with fair opportunities to balance family and work life, no matter how much institutions talk about it. As women, we are often discriminated for making kids and taking maternity leaves, and are asked to renounce our families if we want to go on with research. Ironically, this pressure is often stronger by other women who have sacrificed their families to make career. My advice is to go on, put passion in the things you are doing, but also learn to take things the way they come. Invest a lot in your work, put a lot of passion in research if this makes you happy, but always leave you other options opened: research is wonderful, but there is much more to life than that!